Some time ago I created a script to generate and update Munki manifests for macOS devices managed by Intune. It was based on Azure AD Device groups for adding included manifests and catalogs. Only being able to use device groups has it's drawbacks...

Wow, it has been some time since I last posted something on the blog. I've been focusing all my time on developing tools like IntuneCD and IntuneCD front end but, today, it's time for a new post!

Some time ago I created a script to generate and update Munki manifests for macOS devices managed by Intune. It was based on Azure AD Device groups for adding included manifests and catalogs to device manifests.

Only being able to use device groups has it's drawbacks as you might be using user based groups to assign applications/configurations in a bigger scale. I have run into this myself using the manifest script in production over the last months.

Today, we are going to look at using the new and improved Munki Manifest Generator tool I released a few days ago in which you can target both device and user groups. This time it is created as a Python package instead of a script making it easy to install and get going.

Todays post will focus heavily on setting this package up to run on an Azure Automation Account.

Before we do anything in Azure, all required packages must first be downloaded. Download the following packages Build distribution (.whl)

Now that all the required packages are downloaded, head over to Automation Accounts on Azure and open your existing account or create a new one.

Since we are getting groups and the members of the groups and devices from Intune using Graph API, an App Registration needs to be created.

In the deprecated script, all connection variables was saved in the script which is not a secure option. This new package instead use environment variables so we can use them more securely. In Azure Automation we can use variables and get them from a runbook, sensitive variables can also be saved as encrypted values.

As you can see here, I saved the storage connection string and the client secret as encrypted variables.

The building blocks to be able to run the package in a runbook are now in place. Now, let's create the runbook that will execute the script that will create and update manifests for devices.

The script below is the same example as provided in the GitHub repo for this tool.

In this script, I have also enabled the -t argument which means that the tool will run in testing mode, providing full output but are not making any changes to the manifests on Azure Storage. This is useful to test that your groups list is accurate and that no manifests which should not be deleted are removed.

If you have manifests you do not want or need to specify in the groups list and do not want them removed, you can specify the -sm argument like this mmg.main(group_list=groups, test=True, safe_manifest="manifest1,manifest2"). site_default should not be specified anywhere, not in groups and not in safe_manifests.

Once the script has been executed, you will see something similar to the below picture, 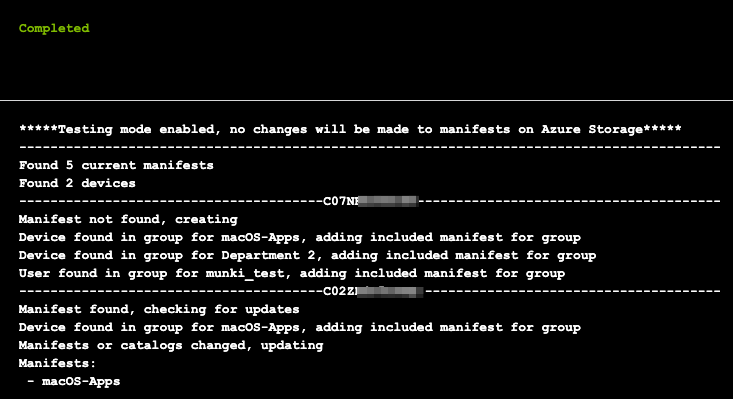 That's it, you have now deployed the tool to Azure Automation. You can connect a schedule to this runbook to have manifests generated and updated continuously so if device or user group membership changes, the Munki manifest for the device will change as well.

In addition to running the script on a schedule, I also have clients executing the script using a webhook using a custom attribute script. This enables devices to quickly create a manifest upon enrolling a new device.

The above runbook script is prepared to be executed from a webhook with a script like below,

I hope this post has been helpful in deploying this tool using Azure Automation. If there are any issues or features you'd like to report, they can be reported on the GitHub repo.

Update priority for apps on Android

Stay up to date! Get all the latest & greatest posts delivered straight to your inbox
Follow @almenscorner

Munki, what about manifests?